The Midwest, soy-based candle company is dedicated to helping other small makers in Nebraska and beyond 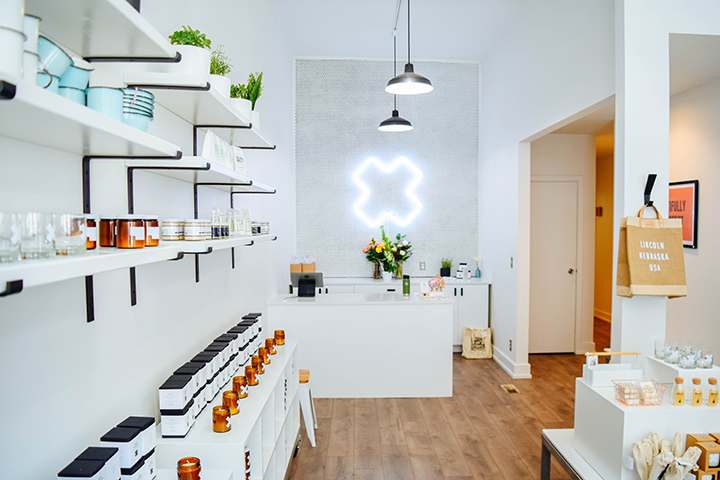 Wax Buffalo Pure Soy Candle Co. opened their first flagship store in the heart of the Haymarket last month. Even if you’ve never heard the name, you’ve probably seen the signature candles—they’re emblazoned with an “X” logo, found in 70 boutiques across the country, and always worth a smell.

Before Wax Buffalo, owner Alicia Reisinger and her husband, Jon, worked to produce a monthly documentary series called “Footnote.” Each episode focused on a larger theme—like death, or community—and was told through a series a small stories from people all over the country.

Although “Footnote” only lasted several years airing on WGN Chicago, Reisinger’s love of travel, community, and storytelling stayed with her.

The series came to a close around the time she became a mother. Her daughter was born with a cleft lip and palate, and suddenly her life dramatically changed. Throughout many surgeries, Reisinger’s focus became her daughter’s health. Looking for something meditative and creative to occupy her time at home, she turned to candle making.

That was for a few reasons. She had grown up learning to make candles with her grandma, buying the supplies from small shops in the Haymarket that used to sell wax and oil. She also learned that many candles she had in her home were made up of toxic materials, and set out to make soy-based ones that would be safe for her daughter to breathe around.

“Candle making was a form of therapy,” Reisinger said. “It's a very simplistic kind of ritual. It's almost like baking, where you're putting this amount of wax in, and this amount of oil. The fun part is, there's only a certain amount of oil you can put in a candle, but you get to vary those oils.”

Reisinger said the documentary work she was doing before Wax Buffalo inspired her to create scents that are story driven.

The Wax Buffalo scent Willow Tree is based off of Reisinger’s childhood home in Kansas that had a willow tree, a dogwood, peonies and lilacs.

“I wanted the candle to smell like when I would walk out the back door and bring back that memory,” she said. 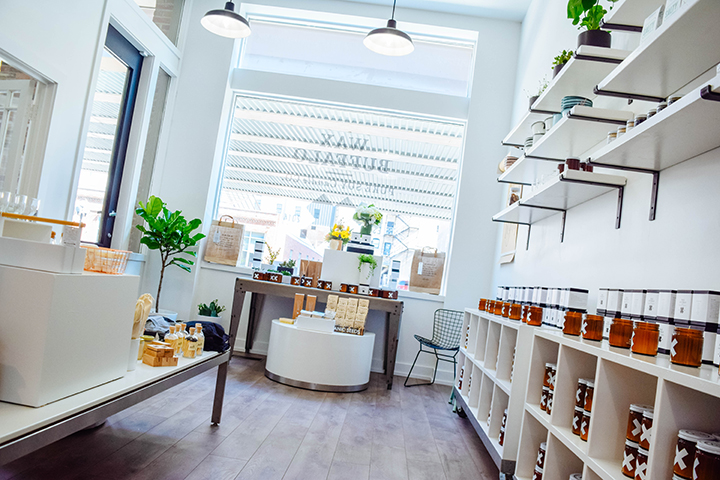 Working from home, Reisinger started gifting her candles to friends. When a small maker boutique called Pilgrimer opened in downtown Lincoln, she was excited with the opportunity to bring in a small batch to try to sell in the store.

“It was such a cool concept store for makers,” she said. “That's where I took a box of twelve candles, and all twelve sold out within that week. It wasn't that many, but to me, I was like, ‘they're all sold out?!’”

Then Wax Buffalo ended up in Hutch, the Omaha Midtown Crossing home goods store, and the company began to grow rapidly through Instagram.

More and more stores started to contact Reisinger, and the stress of distributing her candles through wholesale almost became too much to handle. That’s when she knew it was time to grow, and began hiring employees. Now, Wax Buffalo has a person fully dedicated to wholesale, and a small production team. They distribute to 70 boutiques across the country, including Whole Foods in the midwest region.

Reisinger said deciding to put the flagship store in Lincoln’s Haymarket district was a nod to her early days of candle making with her grandmother. She also works across the street at Archrival, a Lincoln-based marketing agency (believe it or not, Wax Buffalo is her side hustle.)

“We also live close, so we can walk here,” she said. “So I really picked it on personal preference, and hoped that it will grow around us a little bit. Lots of good things are happening in downtown Lincoln.”

The small shop at 727 O Street has shelves of candles as well as homegoods and skincare curated from some of Reisinger’s favorite small businesses.

“The concept of the store is things curated for the modern home and the modern woman,” she said.

Many of the shop’s goods are maker-based, like the Camp Cocktail kits, a women-owned cocktail kit company, or Jacobsen Salt, a family-run business out in Portland.

“They harvest all of the salt out there and we fell in love with that company when we were traveling,” she said. “So everything in here is basically things that I use or I have bumped into in traveling. I wanted to bring stuff in that wasn't here in Lincoln.” 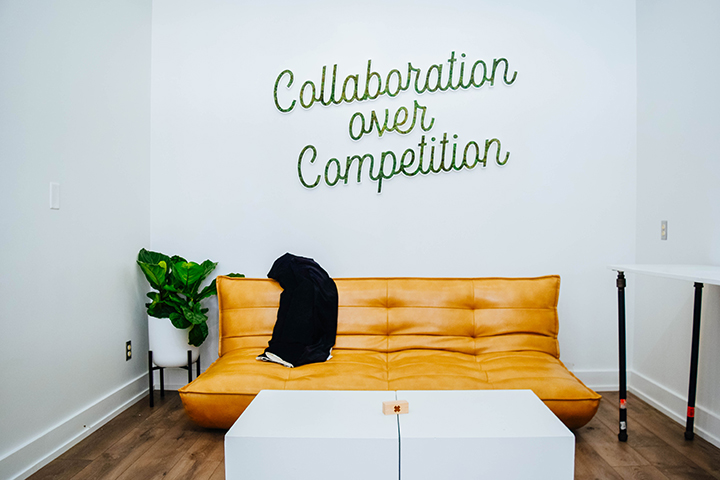 A small space off to the side of the front room draws your eye to the words “Collaboration Over Competition” on the wall. Reisinger has big plans for the room.

“About two years ago we ended up moving out of my kitchen and into the back of a store,” she said. “And we were pouring back there, but then the owner let us sell our candles out in the front and she ran the store for us. And it was such a gift. And I think about the fact that as a new maker, I never could have walked into a $2,000 rent.”

Reisinger wants to pay it forward. The space in Wax Buffalo will be rentable for $500 a month for any small maker wanting to sell their craft in a brick and mortar store.

“So if you're making earrings, and you've always wanted to have a store, and there's no way that you can afford to rent in Lincoln, we want to be the place for you,” she said. “And then also, being in a store everyday, you can't do your craft. So we'll just run the selling for you, and you can try having a store.”

Eventually, Reisinger hopes to host pop-ups of makers from outside of Lincoln, too, bringing in goods from people in California or New York City to Nebraska. The space is also available for events and get-togethers, from collaborations with local breweries to candle-making parties taught by Reisinger.

“It's all about collaborating with other makers and I just think that we're stronger together,” she said. “My friend keeps saying when she wins, we all win. Which just makes me cry, I'm like, ‘yes!’ We just want to be highly supportive to makers that need a little boost like we did two years ago. We want to be the boost.”