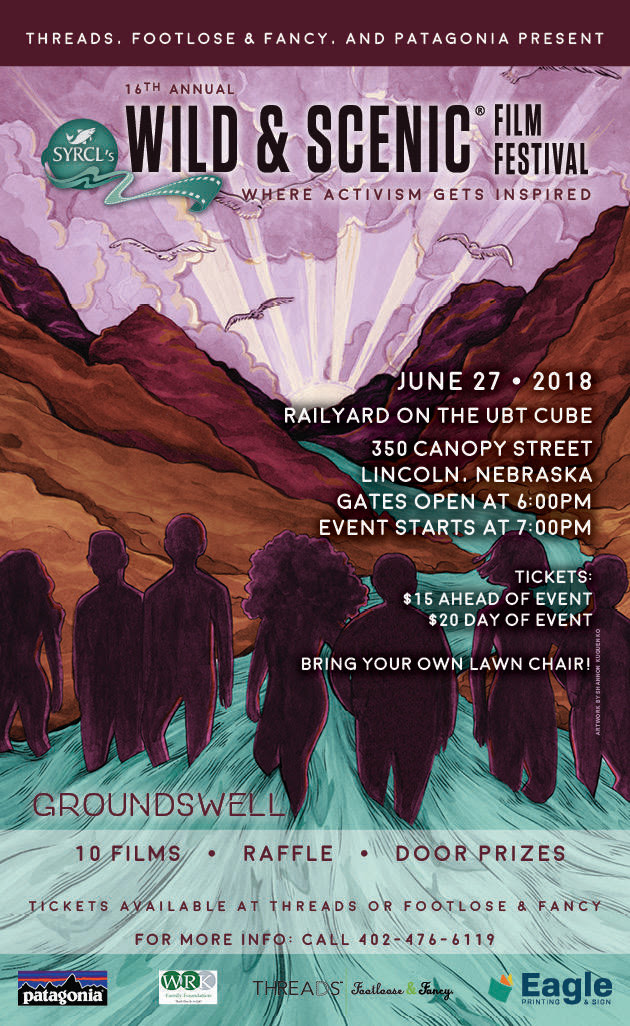 Even small acts can make a big impact in your community.

Jane Stricker hopes people will walk away with this in mind after Lincoln’s Wild & Scenic Film Festival, happening next week in the Railyard.

Her downtown Lincoln business, Threads and Footloose & Fancy, is partnering with Patagonia to sponsor a screening of 10 short films at The Cube on June 27 at 7 pm.

The South Yuba River Citizens League, a watershed advocacy group, started the Wild & Scenic Film Festival in 2003 to promote community building within the Yuba Watershed as well as explore environmental issues through the work of independent filmmakers. Wild & Scenic has since grown to become the largest film festival of its kind in the United States, taking place annually in California.

A tour of Wild & Scenic’s award-winning films became a way to bring the festival to communities nationwide. Threads and Footloose & Fancy sponsored Lincoln’s first festival at the Grand in 2014.

This year, Stricker wanted to move the event outdoors and thought The Cube was a perfect opportunity.

Stricker screened more than 40 of the films from the Wild & Scenic film festival and selected ten of her favorites to show in Lincoln—some two minutes long and some closer to 40—totalling an hour and fifteen minutes.

“It’s a lot of environmental, inspiring stories that I think a lot of people can relate to,” Sticker said.

The short films range in topics from recycling plastic, to fair-trade clothing, to a woman who experiences prejudice as an extreme trail runner because she is overweight.

“There’s also one called ‘Paul’s Boots,’” Stricker said. “This man in Australia had always wanted to climb the Appalachian Trail and he suddenly passes away. So his wife sent out a bunch of emails asking people who were going to hike the trail if they would be willing to take a pair of his boots along. So you follow eight different groups of people who all have different reasons why they’re hiking, and they let Paul’s boots come with them.”

Attendees are encouraged to bring their own lawn chair, and each ticket includes a free bag of popcorn from Maize Popcorn Company, a canvas tote bag and a raffle ticket for one of 19 door prizes provided by Threads and made possible by donations from brands the store carries.

Patagonia also partnered with Threads and Footloose & Fancy to present a grant to The Spring Creek Prairie Audubon Center the evening of the festival. The money will be used to plant pollinated plants to attract more bees.

Stricker selected the Spring Creek Prairie Audubon Center especially because of the work they do with educating children about environmental issues in Nebraska.

“Starting at an early age, if kids can learn about how important the environment is and how much we need pollinators, I think that’s great,” Stricker said.

WRK Family Foundation will also be presenting a grant to the Audubon Center at the festival.

Since Stricker and her husband bought Footloose & Fancy in 2002, Stricker knew she wanted to use her business to make an impact where she and her children lived.

Whether it’s serving dinner at the City Mission, picking up trash, or hosting a shoe drive, Stricker and her employees try to do what they can to give back to the community, even if it just means donating their time for a few hours.

Stricker said she hopes the Wild & Scenic Festival can become an annual event in Lincoln and will inspire people to take action in their community, too.

“I want people to come to the films because they really show how even the littlest thing can make a difference in your environment,” she said. “It is so easy to recycle a plastic bottle, for instance. And it's so easy to take a refillable water bottle with you. It's little things that can make an impact.”

Watch a teaser for the festival here.

Tickets for the Wild & Scenic Film Festival are $15 in advance and $20 at the gate. They can be purchased at Threads and Footloose & Fancy locations as well as The Arbor Day Foundation and The Spring Creek Prairie Audubon Center. Call Threads at 402-476-6119 to purchase tickets over the phone.